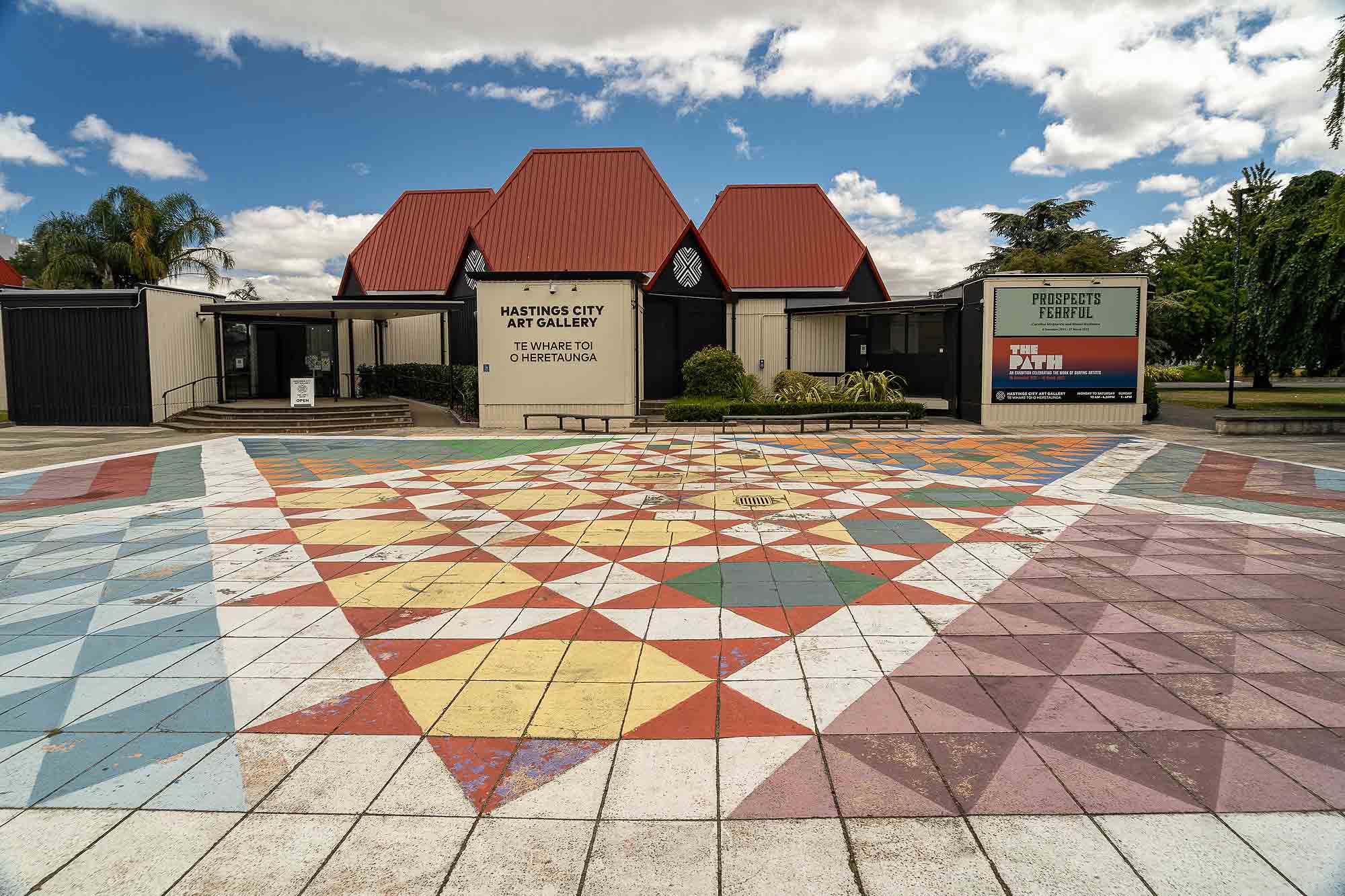 Next door to Hastings library in Civic Square is the art gallery. Te Whare Toi O Heretaunga – Hastings City Art Gallery. Sadly I didn’t have time to explore inside the gallery. Next time I’m in the city I plan to explore the exhibitions. On first impressions I wasn’t going to photograph this building. The colourful tiles in the square in front of the building drew me to the gallery. It’s a shame that the paint seems to be a little faded or weathered. That may be intentional. On the day I was there it was very quiet in the square and I only saw a couple of other people.

One of the coolest things I saw in Hastings Civil Square is Ngā Pou o Heretaunga. Unveiled in 2013, these 18 pou (pillars) each represent an ancestor from a marae around the Heretaunga district. They proudly stand in the centre of Hasting as a tangible link to the region’s cultural heritage. Close up to the camera on the left of the frame is the Hawea You from Waipahu Area. Carved by Tahoe Huata, Colin Tihi and Tiopira Te Huia. In the centre of the photograph, facing the camera is Tiakitai Pou. From the Tiakitai Marae carved by Dr Takiriangi Smith. The red pou on the left is Nukanoa from Korongata Marae by carver David Pere. They were carved from ancient totara trees over a span of 10 months. I spent a lot of time wondering around the pou and photographing them individually and as a group. If I have any of the information about the pou wrong, please do get in touch as I would like to shout out the amazing carvers. 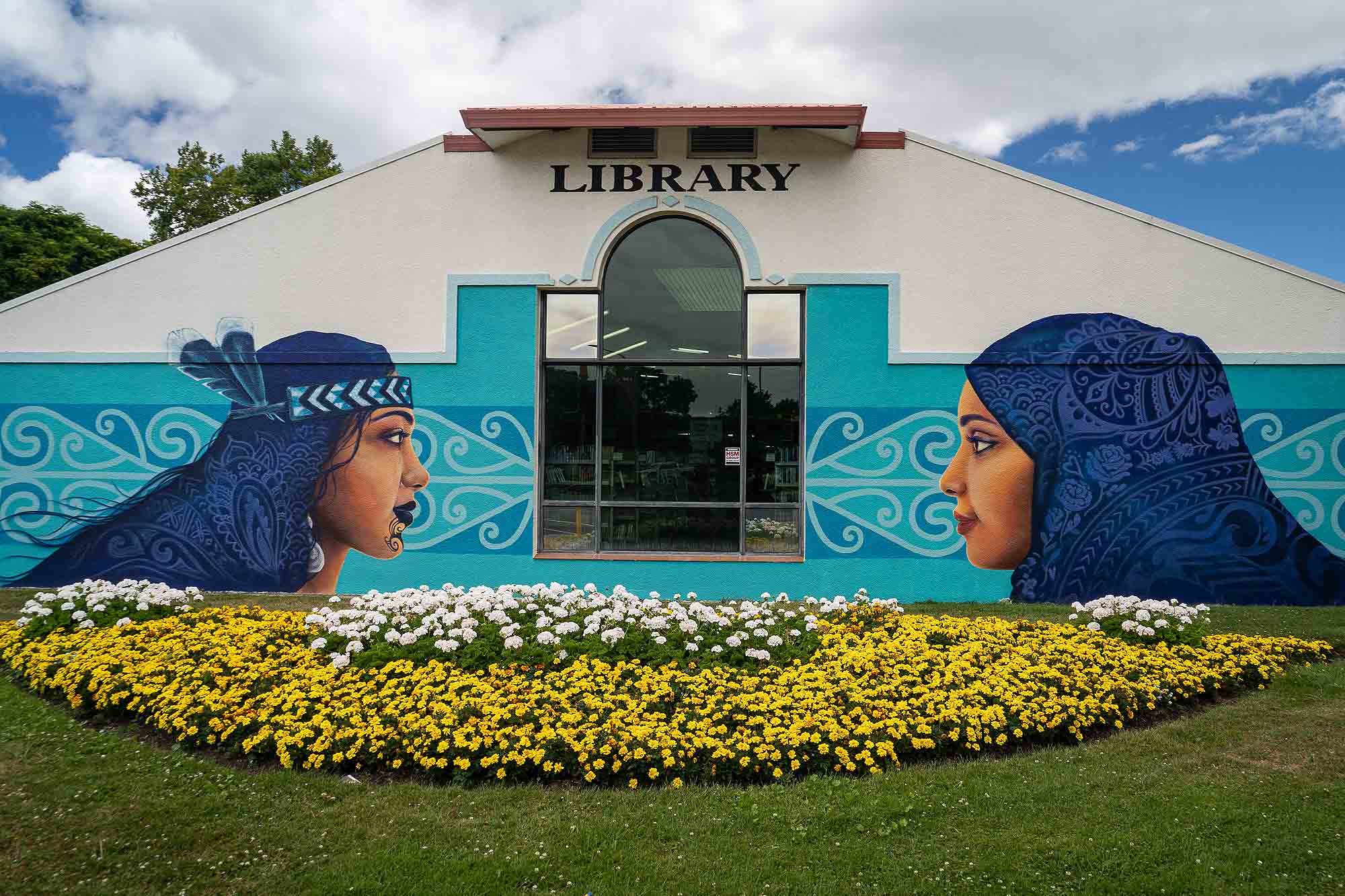 Driving around Hastings city centre, looking for interesting things to photograph. I pulled up at Civil Square and found a few things to explore. This huge mural is on the side of Hastings Library. Created by the artist Erika Pearce and painted in 2019. The mural celebrates the cultural diversity of the Hastings community. After reflecting on the tragic events in Christchurch in early 2019. The artist wanted to create a piece that shows support and love. The two women featured in this mural represent the Māori and Muslim communities. Both those who have lived here for generations and those who are new to the area. There is a feeling of peace, compassion and understanding shared between them. The details in their eyes and the patterns are amazing. The yellow flowers in the foreground help make the bright blues stand out on the wall. 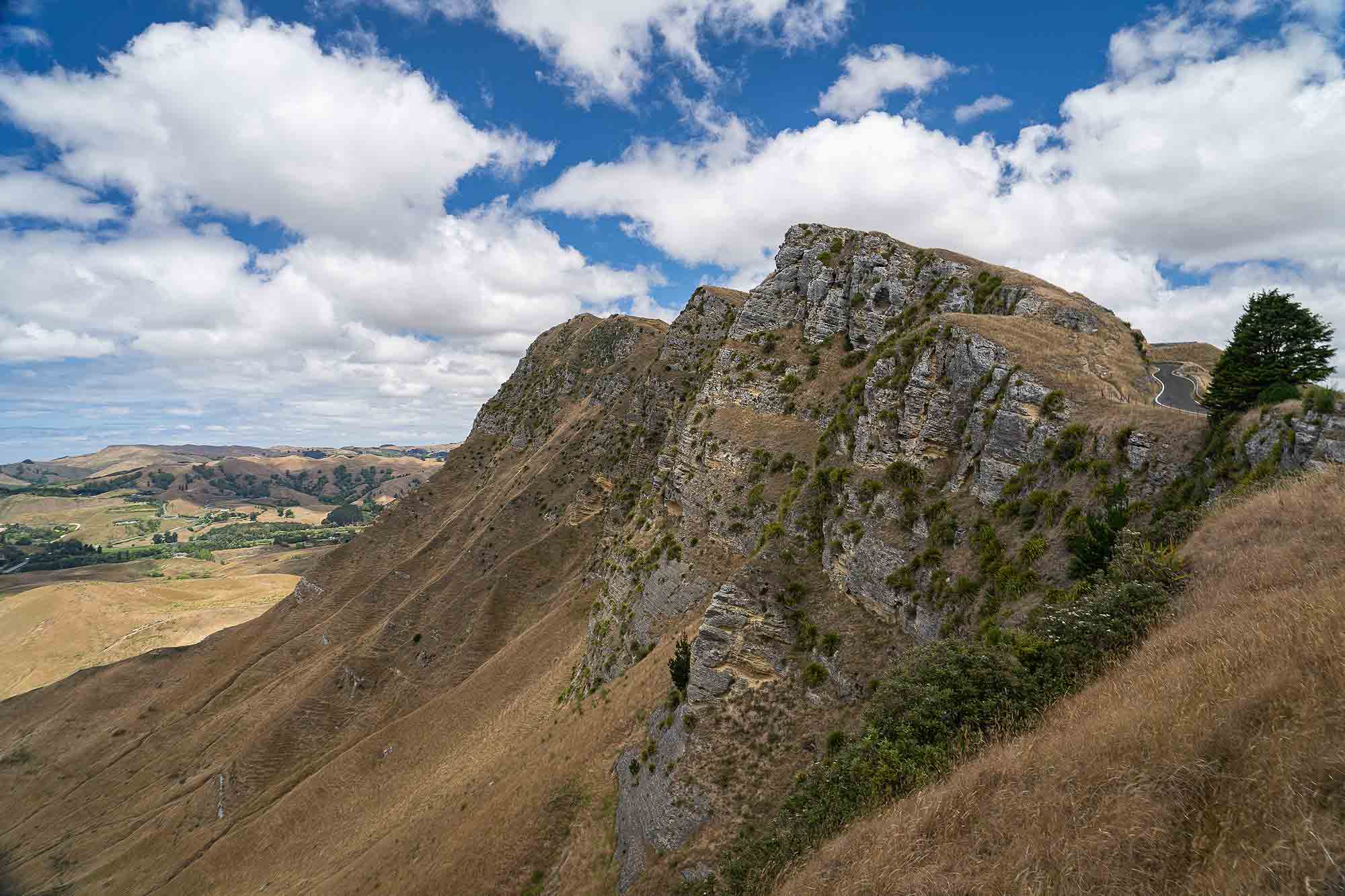 Looking up at Te Mata Peak is nearly as dramatic as the view from the top. This was taken about half way up, past the Peak House cafe looking south. You can just make out Te Mata Peak Road off to the right. Due to the camera angle the actual peak is on the left of the three tallest looking parts of the mountain. The other two are lower but from this low angle look higher. The Te Mata hillscape has a legendary story. Many centuries ago the people living in pa (fortified villages) on the Heretaunga Plains. They were under constant threat of war from the coastal tribes of Waimarama. At a gathering, a wise woman suggested that the leader of the Waimarama tribes, a giant named Te Mata, could be made to fall in love with Hinerakau, the daughter of a Pakipaki chief. Turning his thoughts from war to peace. This mission was quickly accomplished. Te Mata fell under the spell of the beautifully Hinerakau. The people of Heretaunga had not forgotten the past and wanted revenge. They demanded that Hinerakau make Te Mata prove his devotion by accomplishing impossible tasks. His last task was to bite through the hills between the coast and the plains. So that people could come and go with greater ease. Te Mata died while eating his way through the hills. His half-accomplished work can be seen in what is known as The Gap or Pari Karangaranga (echoing cliffs) and his prostrate body forms Te Mata Peak.